So I decided to start wading further out of my comfort zone today and try my hand at pretzels. This was almost certainly a mistake as it’s a Monday after a crazy busy weekend, it was a cloudy almost but not quite rainy day which means my son was having a terrible reaction to the high pressure system, and I could go on. But you  know what? I’m trying not to be such a perfectionist.So a little failure is good, right? 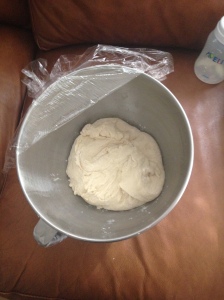 Making this was my first time using the dough hook on my Kitchen Aid- that alone made this project worth it.

I used Alton Brown‘s recipe because I’m trying to pull from a wide variety of sources for these projects (also because I found quite a few blogs that word for word copied his recipe and directions without giving him credit- come on blogging world). I mixed the dough and added a little extra flour because it was still pretty sticky after the 4.5 recommended cups and then left it to rise for an hour. After the hour was up it had risen quite a bit but some of the puff went away once I started working with the dough again. I separated the dough into 8 pieces, so far all was going according to plan…

And then my son was no longer amused with his lunch so I was back and forth between trying to keep him happy (He actually loved playing with a bit of dough, until he’d drop it off the high chair every 30 seconds… fine motor skills are hard to come by!!)and trying to make the pretzels. I did not have the patience to keep the dough into long enough ropes to truly form a good pretzel shape without breaking. So my first few pretzels looked a lot like this: 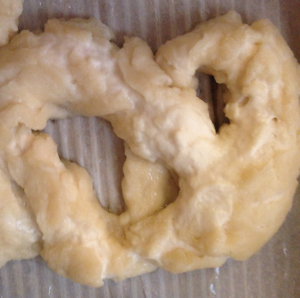 OK, that’s a lie, they looked a little better than this, this is how they looked once they came out of the boiling water- like zombie pretzels

I saw that this was not going well and I didn’t have time to even make halfway decent pretzels with how grumpykins my son was getting so… in the spirit of being ok with a change of plans and making lemons into lemonade I decided I’d make the rest into pretzel buns. and since buns took less dough than the pretzels themselves I also had some dough left over to make pretzel bites too. And then I baked all the pretzel variations together.

The zombie pretzels still came out pretty zombie-ish. but the pretzel buns were AMAZING!! 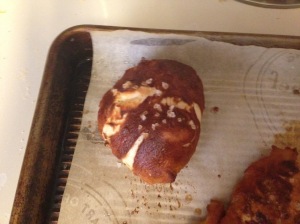 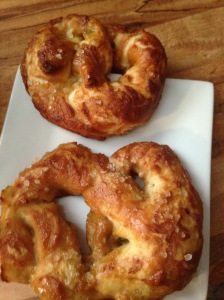 And even though I hated how the pretzels looked? They tasted SO WONDERFUL I don’t even care. My husband agreed they were some of the best pretzels he’s ever eaten. And he was born in Germany so he would know.

Now I just need to hunt down a good cheddar/fondue dipping sauce to enjoy with our pretzel bites tomorrow!