I had a big victory this spring while my husband was traveling. I knew I’d have space and time at night after my son went to bed so I tackled the huge project of putting our physical photos into some semblance of order, purging or giving away duplicates or especially blurry/unrecognizable photos, and keeping them in a unified storage space for when I’m ready to use them for scrapbooking or other projects. It took a lot of work and time but was worth it. All that work and time was nothing compared to what I needed to put into the hot mess my digital photo collection used to be.

I started working on this project in February after hearing a speaker on this subject at my MOPS group. She presented some manageable steps to organize photos and while my organizing goal was not quite as detailed as the way she kept her photos, I knew I needed to weed through all the “iPhone backup” folders I’d created on my desktop and all the duplicates that came with that.

The best pieces of advice from that talk that stuck with me were that it is best to start with all your unsorted photos in ONE place. So I created a folder on my computer that I literally labeled “FOR THE LOVE OF GOD ORGANIZE THIS” and was immediately discouraged as I moved pictures into it- there were THOUSANDS of images for me to go through. After spending a few days debating if I wanted to give up on this project, I decided this could be a 10-15 minutes a day type of commitment during nap time or after we put the toddler down for the night. 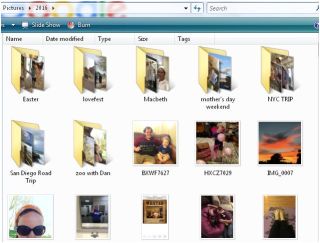 I didn’t put ALL the pictures of my son in his file, just pictures of just him that didn’t connect to a family event so he still features prominently in our regular yearly files- this worked for me!

Some days, that was all I gave it. ten minutes. Other days, I was on a role and very motivated and ended up giving it an hour or so at a time. I slowly created folders in my computer to move photos into and I realized that my brain worked best organizing chronologically, but that I also wanted to have separate folders of pictures that focused on my son so if he ever wanted them (or if we needed them for future school projects, etc.) they’d all be in one place. So I created a large file under his name and sub folders with 0-3 mo, 3-6 mo, 6-12 mo., and ten started going by calendar year after that (2015, 2016, etc.) to line up with my general picture keeping which is also by calendar year aside from “grad school” and “pre-grad school” which is all lumped together and contain significantly less digital photos than the years that came afterward.

The other fabulous tip was that sometimes it is easier to purge pictures when you can compare them on a big screen. This is why I started backing up everything to the desktop instead of my laptop. If you have kids you know that you take about 40 pictures of a moment just to get one with them looking at the camera or without blur. It’s easy to pick the best one or two on a bigger screen! It helped me start going through and getting rid of those duplicates. Duplicate and blurry photo deletion was honestly the biggest part of this job and organizing chronologically really helped me easily search if I already had a picture of that event or moment.

I ended up with not only having my pictures organized, but at a quasi-manageable amount so that if something tragic happened (to me, or to our scrapbooks!) it would not be a huge chore for someone else to access these memories- they wouldn’t need to spend the hours I just put in all year. So seven months later- I don’t have every file named and described, but I have it in general folders that describe big events and all chronologically organized. This is what I envisioned and now I only need to maintain the habit which should not take more than 20 minutes a month. This process has also given me a clear picture of what memory keeping projects I may want to approach next and I am set up for success when I have time to work on those projects.

If you’ve put off organizing your digital files, I highly encourage you to take the first step and chip away at this project a little at a time. (I also encourage you to have them backed up online or on a portable hard drive or both!) And as a bonus- you’ll find all sorts of fun photos you may have forgotten about. Like this one I found from my husband during our grad school days: 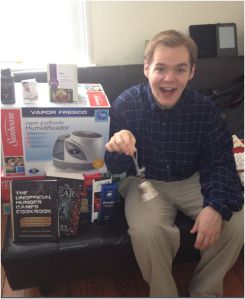 5 thoughts on “Conquering the Insanity of my Digital Photos”