I have been thinking a lot the past week about the devastating fires in California, and the people who have lost so much. It’s made me re-think some of our emergency plans to get the really important documents and backup hard drive out should something happen. It has also made me think about the pictures that are not backed up anywhere else and that are irreplaceable (adding this to the list of projects for the future…), but it has also made me think about small, significant objects that wouldn’t necessarily be noteworthy to replace on an insurance report, but are endowed with meaning through love. 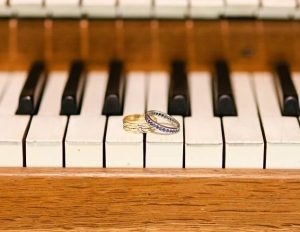 Let’s start with an obvious thing that is monetarily valuable as well, but it’s true value is rooted in love. For two days last week, we thought that maybe we’d lost my husband’s wedding ring. I say “we” lost it because my husband had placed it on the counter when doing the dishes and it was very nearly lost when our son was exploring the kitchen and almost dropped it down the sink. I put it in a place that made sense to me as a place that it would easily be found-the hooks where we keep our keys. I placed it over his keys figuring he would find it in the morning. Of course, morning came and he was heading out to work tired as ever and before having his morning coffee and the keys came off the hook when he grabbed them and with it, his ring. It dropped on the rug where we keep our shoes by the door and in didn’t make a sound. As the day went on and shoes were shuffled on and off, it slowly slid under the rug. By the time he came home and I realized he wasn’t wearing his ring, we both began to panic slightly as we recounted where the ring had been, and what our miscommunication was. That ring is irreplaceable to us. It’s not just a piece of jewelry, it was blessed during our wedding ceremony. Beyond that, it is not just a symbol of our marriage, it is a treasure passed down from my husband’s parents. You see, his parents both passed away before we were married and his ring was created out of their two wedding rings fused together. It is a completely irreplaceable piece. Thankfully, after a day and a half of turning the house upside down looking for it and praying to find it I can’t tell you how many times, I found where it had gone, said about 100 thank yous, and placed it safely in my own jewelry box until it could get safely back on my husband’s finger.
But that’s not the only kind of treasure I’ve been thinking about. That’s something that would be easy to see as a treasure, even if it is not YOUR wedding ring. What I’ve been thinking about are the things that love makes lovely. I keep thinking of the phrase a graduate school professor of mine said in relation to King Lear, “We sanctify things by our love” So I’ve been thinking about the little things that represent so much love to me. The framed hand written quote about artists being like song birds, the picture frame painted enthusiastically if not in the 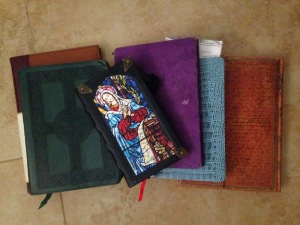 most matching colors that was my Mother’s Day gift last year, the paper flowers, the stuffed animals from childhood that our children now play with, the handmade baby blankets, handwritten journals, which chronicle so much love and struggle… None of these would be the things we’d run back to grab in a fire, but they are all things that hold memories which we would grieve deeply if they were lost.

So having just finished a weekend that was hopefully dedicated to thankfulness more than sales (though no shame if it was dedicated to both), I’d like to invite you to think with me about the everyday treasures that you may not even realized you are thankful for because they have become so reliable. They aren’t the big, life sustaining things like shelter and clean water and food and heating and cooling in extreme weather that we tend to list first this time of year (and goodness knows I am DEFINITELY oh so thankful for those things), so they might get a bit overlooked. They are the true keepsakes that stand out from the clutter that can so easily invade a house and eclipse what really makes our house a home. They are the treasures that might, by other people, be mistaken for trinkets. And now that I’ve shared a few of mine, I’d LOVE to hear about yours.

One thought on “Everyday Treasures”