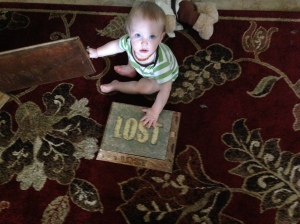 **Today’s post is split into two parts, the first will focus on the actual baking project. The second will give you some of the awesome ideas we used for the rest of our party.** 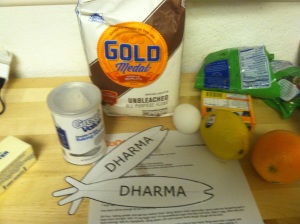 Most of your basic ingredients… aside from the sugars.

Those of you who watched the TV show LOST will remember that in season 2, Sawyer discovers how the polar bears were rewarded with DHARMA fish biscuits. Those of you who didn’t are probably wondering if that sentence made any sense and will be pleased to know that there are no fish in these biscuits, just a delicious sugar cookie shortbread like hybrid with a citrusy twist. 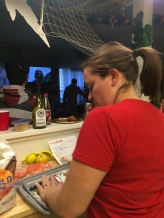 Working while I watch the pilot episode…

The recipe was based on this Fish Biscuit idea, so check the link for the exact ingredients, but I added some of the citrus juice with the zest for a little more kick and a bit of a softer cookie when they first came out of the oven. This is a time intensive recipe as well. In fact, it was time intensive enough that we started this project two hours before the party and I was still working on it after dinner was finished and the LOST watching started. For this recipe you start with two mixing bowls- one for the buttery goodness and one for the rest of the dry ingredients. The key to getting the color right is keeping the dry ingredients separate until after you’ve added your for coloring to the butter mixture, so whatever color you make that mixture, know that you are going to get something just a shade lighter at the end. Also, it gets messy, which is part of the fun right?! It was probably a little more crazy because we were trying to mix with only one beater in place… adventures in cooking new places! 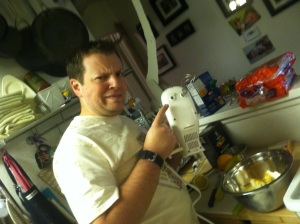 (Actually this kitchen was better equipped than my own and I loved it!) When in doubt you can use clean hands to help you mix!

If you are a lost fan, you are going for the same shade as the DHARMA fish biscuit Sawyer Eats:

With the consistency of the dough you will need to divide the dough into patties about the size of your hand and put this in the fridge for a few hours before rolling it out and cutting shapes. If you doubled the recipe like we did, you will probably want to keep a few of the discs of dough in the fridge while you roll out the others or the shape will not come out as clear. (again if you are not making fish biscuits you could still cut out the dough in some heart patterns or letters or whatever your occasion may call for) We carefully cut out our fish pattern using the template in the link above, then I called in back up for carving the DHARMA letters since my handwriting leaves something to be desired on paper, let alone pastry. 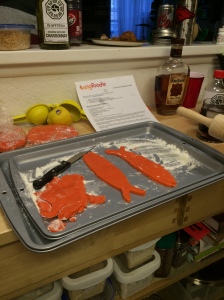 Pictured: E’s hand. because my own has terrible penmanship. 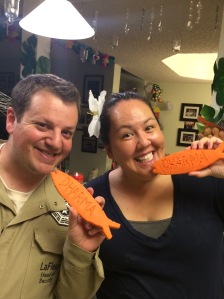 This was a total success. Not only did they look great and fit our theme perfectly, they taste AMAZING. They were crunchy on the end and soft in the middle when they first came out of the oven, but when we were eating leftovers the next day they were definitely more biscuit consistency. The added citrus balanced out the sugar perfectly and everyone had a great time eating them. Of course, this was only one aspect of our LOST party. We planned this party because it was 4/8/15 which are significant numbers in the show. However, you don’t have to wait until 8/15/16 to throw another LOST extravaganza. Check out some other ways we decorated and celebrated: 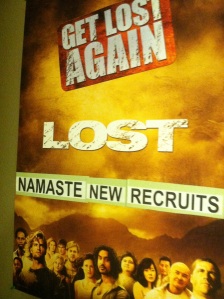 An amazing bar setup is key to an awesome party. This one is complete with DHARMA soda, wine, beer, water, mini bottles from the plane, Moriah Vineyards wine (Desmond’s monastery) and MacCutcheon Whiskey (Mr. Widmore’s drink of choice)

Even the fruit gets a Dharma label

Some ideas were your standard Pinterest awesomeness such as island decorations and the awesome way of serving drinks- turning some foliage and plane crash survivor luggage into a cooler: 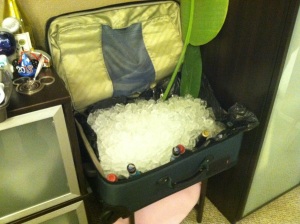 Some things you could buy or rent: 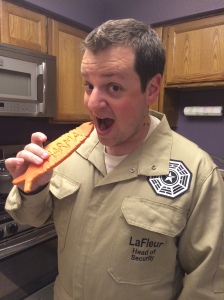 While you can do home made Fish Biscuits such as those detailed in this blog post, you can also wear AWESOME LOST themed outfits you can buy or rent.

LOST bobble heads and did you even know LOST made themed vitamin water?!

Some things were homemade, including personalized hatch signs: 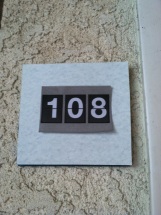 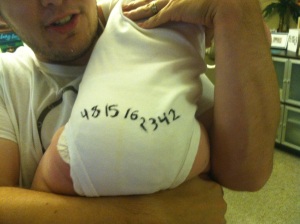 The back side of my son’s baby outfit I made for the occasion— because all onesies need something cute to look at while baby is crawling!

Some things were just strokes of genius by our party hosts and decorating crew such as the idea to create a copy of the four toed statue as a rice crispy treat (A job my sweet husband was given and which was accomplished thanks to the power of babywearing!) What lies in the shadow of the statue? Deliciousness. 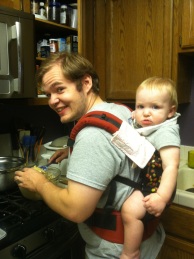 It’s hard to tell from this picture how awesome this decoration was- there was a small lofted area of ceiling above their dining room table which they decorated above the light to look like the top of the hatch. It was many people’s favorite piece of theming.

Oceanic tray (Or is it an airplane piece?!) to serve drinks on!

Insert iconic pictures from the show subtlety in amongst your family photos as an “easter egg” for guests… other easter eggs included the numbers hidden in various locations, a black smoke monster, and more!

There were many more details but I hope this gives you some good ideas since this after all still supposed to be a baking post. I’ll leave you with this super sweet quote that was left on the whiteboard the next morning:

That Christian Shepherd quote pretty much sums it up- The most important time in your life was the time you spent with those people in there. If you want to here more about that, you can see my last post all about friendship.

2 thoughts on “Baking #15: Fish Biscuits or How to Throw a LOST Party”