I mentioned in my last post that I had a fun Sunday evening with some of the ladies from my moms group. We got together for a Moms Night in Game Night that led to lots of laughs, getting to know each other better, and an all around fabulous night!

I organized our game night to try out the new game I’d just been sent: Kinderperfect . I had just recently heard of this game as they donated a copy to our Babywearing International of Phoenix main event and there was a lot of buzz from members talking about how interesting it looked or how fun it was if they had already played it. I was thrilled to have a chance to review it!

One of my favorite combos… I picked the bottom card because I know I’m not the only one that needs way more tests than seem necessary to make myself believe I’m pregnant!

If you haven’t heard of this game, imagine a spin off of Apples to Apples or Cards Against Humanity that is aimed specifically at parents. The cards are written by parents, for parents. The card content is a little more edgy than Apples to Apples but far less potentially offensive than Cards Against Humanity (think of a PG-13 rating.) The red cards act as prompts that players use the white cards to reply to and then whoever’s turn it is to judge picks the white card they like best and the person who played it gets the red card- the person with the most red cards wins.

Since the game is focused around parents, I knew women from my MOPS group (Mothers of Preschoolers) would be perfect players. This game did not disappoint. While Cards Against Humanity has led me to a lot of laugh out loud moments while playing, most of the humor comes from shock or taboo or cynical sarcasm (which, don’t get me wrong, I love…) but the strength of this game is that the humor comes from truth- from those cringe  worthy moments of recognition. While some of the white cards seem almost too specific to work with very many of the red cards, others seem almost universally applicable. Actually, what ended up being the most fun for me was the discussion that was spurred by the cards that came up. Amidst the laughter we all got to know each other better. 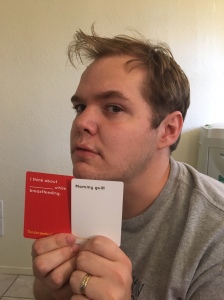 Just another reason I know my hubby and I are meant to be… When I was the judge for this red card on Sunday I chose Mommy Guilt as MY winning card… Amazingly he chose the same one Wednesday without even knowing!

One thing we wondered while playing on Sunday was if dads would enjoy this game as much as moms so I added some dads to the mix last night for a double date night in. While some of the language on the cards are definitely pretty gendered, that awkwardness just led to more laughter (such as when my husband got the card I think about _______ while breastfeeding…). Whether you want to play with just a few people or a large group, if you are a parent you will have a blast and learn something new about your friends and their #parentlife. Our only disappointment was that there were so few red cards we went through all of them in one sitting! Luckily, the creators are currently working on adding more and in the meantime, it is super easy to combine this game with Cards Against Humanity (or Apples to Apples, whichever you happen to have around!)

The creators of Kinderperfect are in the process of creating elementary school and tween expansion packs and if you check out their website  you can submit your own ideas that might be included in future cards! You can also go through their website to buy a copy of this game so you can gather your own parenting tribe around for some much needed laughter and down time! It was exactly what I needed during a week otherwise filled with a lot of stress about this pregnancy, and a game I know we will be suggesting at many gatherings in the future. I already have other parents asking me about our next game night!

What’s your favorite game for a parents night in? I’d love to hear about if you suggest a card to Kinderperfect!

***I received a copy of this game in exchange for my unbiased feedback. All opinions are my own***

One thought on “Community: Kinderperfect and Parents Night In!”