Sometimes I worry that my blog gets a little schmaltzy. I’m a passionate person and I have always had intense feelings- both on the positive and negative spectrum. I just do a whole lot of feeling. I’m sensitive to joy and sorrow, pleasure and pain. That being said, I don’t think I’m alone in LOVING this time of year and all the Christmas traditions and merriment. It is truly a magical time of refocusing and rejoicing. I want to talk about a Christmas where things felt neither calm nor bright.

This morning, thanks to timehop/facebook’s “on this day” I found a post from 2006 that talked about being in Northern Arizona. For the life of me I couldn’t figure out why… at first I thought I was referring to driving home from college and making a pit stop there… but that made no sense as the route I drove from Pepperdine never went that far north and then it hit me… I had completely blocked out that Christmas. Probably my least favorite Christmas ever. My family was going through some crazy times. In order for my one of my family members to come home for Christmas it was recommended that we spend the holidays away from home (the much warmer Phoenix area) due to bad influences that were so close to our home. It had already been a rough, stressful year and now we were not going to be home for the holidays for the first time in my life.

Still, my mom had made careful arrangements so we could all be together. We were in this tiny house up north and were all sharing rooms and it was SO COLD compared to what I was used to. Tensions were high because all of us wanted to be home but we also wanted everyone together to have a 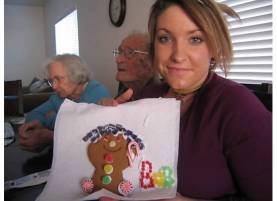 good holiday. There was other unrelated family drama. The “fun activities” my mom had planned like making gingerbread houses turned into their own strangeness when my sister decided she’d rather make a gingerbread Bob Marley. We had to play a family therapy game and then discuss it after which only led to more arguments. The problems themselves were fairly first world- we all had food and shelter and gifts, but the pain and disappointment and sadness with what was going on was very real and deep.

Of course, the icing on the fruitcake was my dad picking us up for Christmas dinner. My parents are divorced so holidays have always been a little tricky to navigate, but since we were so far from where we lived, we couldn’t just have dinner at one parent’s house and then go back to the other house for gifts. My dad hadn’t arranged anything formal with the few restaurants up there that offered Christmas dinner menus, so… you 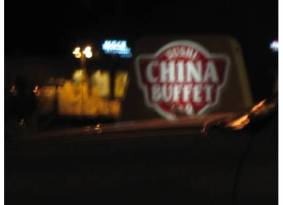 I took this from the car as we drove away. It was a very “As God as my witness I’ll never do this for Christmas again” kind of moment

guessed it… we ended up at a Chinese buffet. Straight out of a Christmas Story. One of the few vivid memories I have of that day is excusing myself to the bathroom during dinner, going to a stall, and crying and crying while I texted one of my best friends about how awful everything was. My other Facebook posts around this time basically talk bout how I wish I was back in London where I’d gone that summer. (As if London doesn’t get cold in december!)

I never imagined a decade ago that someday I’d be celebrating Christmas in a home of my own, with my own little boy, who delights in few things more than playing Christmas songs on kazoos and staring at Christmas lights. Most of my Christmas seasons aside from the one described above have been pretty happy, but I had no idea they could be THIS happy. So that’s the first pint I’m trying to get at in this blog post- if you aren’t feeling merry this year, it gets better. To quote one of the only non-hymn Christmas songs I love: Have yourself a Merry Little Christmas. Let your heart be light. Next year all our troubles will be out of sight.

It’s ok if things aren’t great. Hold on until next year, or the year after. A decade down the road you may marvel at your blessings that you never thought possible. But speaking of blessings, that leads me to the second thing I want to say: you may have more blessings now than you realize. I look back on pictures of that Christmas full of shivering and tears and I now see so many things I missed. I see that I wasn’t the only one not 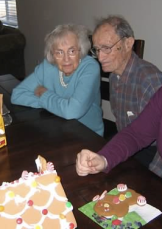 I love them so much.

having the Christmas I wanted or imagined, that we were all making sacrifices to celebrate as a family. I see pictures of my grandma and grandpa together. They were in their 80s and dealt with the cold better than I did. I don’t remember spending time with them that Christmas. I remember hiding in my room and texting friends for support. I can’t believe I wasted that time I could have had playing cards with my grandpa who is gone now. Just this week I cried over being sick and missing out on making ravioli with my grandma and mom and brothers, even though I will get to see them Friday. I had time with us all in the same place and I wasted it. 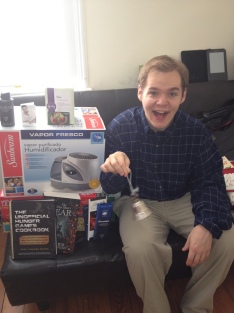 That’s not to say you are never allowed to have a lousy Christmas. I think even if I had realized the things I do now back then, it would still have been my least favorite Christmas to date. We were in a rough patch. On top of that, Christmas when you are dealing with a loss or the first Christmas without a loved one can feel impossible. But I believe you can celebrate in the midst of disappointment and heartbreak. So if you’re feeling down, know that you aren’t alone. Know that it will get better. Know that this is a piece of your story but not the whole story. Find your people, and have them help you “muddle through somehow” and although things may not feel merry or bright, I hope that, even if it’s just for an hour or two at a time, you will manage to have yourself a merry little Christmas NOW.