When I invited my high school bestie over for dinner and she suggested this skillet meal I was more than onboard. I was excited to break in my newly re-seasoned skillet and the recipe itself sounded DELICIOUS! 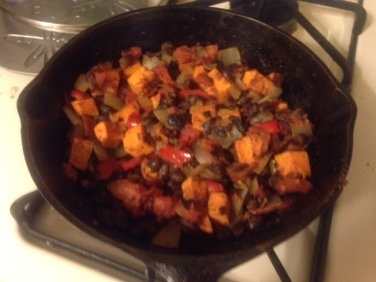 This is a messy recipe but pretty easy. It is mostly chop and dump. This probably would have gone faster if I wasn’t also trying to appease a cranky toddler boy. It was still pretty fast though and all of the ingredients are delicious: bell pepper, sweet potato, onion, tomato, black beans, and that’s before we even get to the REALLY good stuff in the garnish: cilantro, green onion, one of the food loves of my life: avocado and of course a ton of CHEESE!

I mentioned that this recipe is a bit messy… our experience was probably messier than yours will be if you try it out because my cast iron skillet wasn’t quite big enough for this GIANT recipe (seriously y’all… the recipe makes a TON of food. It even says the serving size is 6. We seriously considered halving the recipe but didn’t want to worry/think about saving half a can of beans or tomatoes- it’s way easier to just eat leftovers) and by the time we were supposed to add the tomatoes and beans our skillet was overflowing… LUCKILY I have a mini skillet too (perfect pizzokie size! and by perfect I mean that is probably the only thing we’ve used it for until last night. So we tried to transfer some of the food to the second skillet which resulted in a few misses… 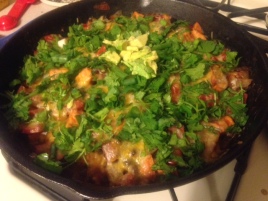 After combining everything and letting it cook through our final step was top with lots of cheese and stick the skillet in the broiler for a few minutes until everything was melty and perfect. I finished chopping up our toppings while that happened and then everything was ready to top and dish up. YUM! It was delicious and I’m pretty excited about the leftovers. We enjoyed this topped with hot sauce and paired with a red wine (full disclosure: we would have paired anything we cooked with red wine) 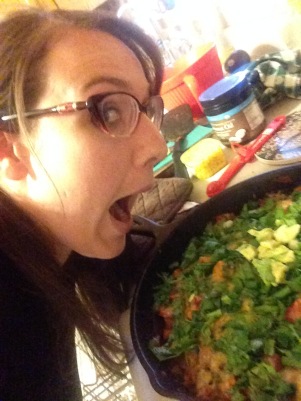 The meal and company was awesome. The cleaning up after not so much, but that’s life, right? Hoping to get back into the cooking posts now that Macbeth is over and I’m home more!