He was excited to finally cake smash…

So, I wasn’t originally going to write about this as my baking project, but after how much fun we had, I thought I should share. With how busy we’ve become since having a baby, we were fiercely protective of celebrating our anniversary. We even turned down jobs to keep the day open so we could celebrate together. However, while May 12th is our anniversary and my poor husband has SO many celebrations he has to make happen in May between birthdays and mother’s day etc. that we decided to stay home and celebrate with a home cooked meal. He did dinner and I did dessert. At our wedding we had some AMAZING cupcakes made by a dear friend and some truffles which were perfect for our celebration. We didn’t have a traditional wedding cake, and we did not smash cake in each other’s face per my request. I told hubs that if he wanted to smash cake in my face we could raincheck. He had yet to take me up on it so I decided our anniversary was the perfect opportunity. (maybe I just have cake smash on the brain with my little one’s first birthday coming up…)

We changed out of our fancy clothes before this endeavor…

I made a basic white cake. There were a lot of recipes online that suggested starting with a box cake and then adding things but I really wanted to make one from scratch so I combined a few recipes I saw to come up with my own creation. I based it on the “Annie & Finnick’s wedding cake” recipe from my Hunger Games cookbook and adjusted from there. I did not use their frosting recipe because I wanted to make my own cream cheese frosting instead of buttercream. Of course, life happened and my husband was delayed at work so after all that self righteous fuss about not wanting to use a box cake I ended up using store bought frosting… at least I had my own sprinkles to add!

It was a BLAST. I feel like a strength in our relationship is the amazing amount of laughter it contains and we had laughter in abundance, even when I got frosting up my nose (thanks honey…) There was a video of it but I can’t get it to upload so the post-smash pictures will have to do: 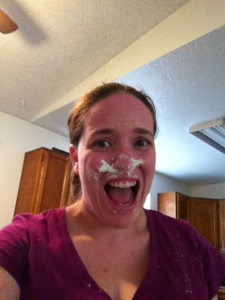 Some of our other favorite ways to celebrate anniversaries so far:
*Staycations

*Reading the letters we wrote to each other on our wedding day
*Reading some of the letters we wrote during our Engaged Encounter retreat
*Watching our wedding video
*Watching our “Love Story” video we had made. This is one of my favorite gifts we chose to give one another. It’s a recording of us talking about how we met, fell in love, and got engaged. And hopefully DVDs don’t become too antiquated because I intend for it to be something my grandkids can watch someday. I would have LOVED to have something like this from my grandparents!!
*Short trip up to Northern Arizona to escape the heat
*Dinner out
*Morning coffee date since that’s how we started dating
*A spin off of the interest inspired picture within a picture thing- we take a picture with one of our favorite wedding pictures each year that reminds us what was going on each anniversary. One year it was traveling in Sedona, last year it was with my very big baby bump on display and this year it was in front of a pile of baby toys and mayhem.

Do any of you have special ways you commemorate your anniversary? I’d love to hear about them!!