OK, the new year is fast approaching and it is time to reveal my final focus for 2016 and recap the Cs I’ve already discussed.

So, first the recap. The Cs I have already talked about is Chronicling– I want to document the year both by continuing to blog and by memory keeping whether it be digitally, via scrapbooking, or some other form. Cooking– this is my new 42 projects in 52 weeks for the year. Sometimes I’ll try something fancy, but mostly I’m looking for meals I can use again and again as I recipe plan for my family. I’ve also talked about Creating– I want to continue my work in the performing arts as well as writing and crafting (I don’t have a set goal for how many of those projects I will attempt, but I do already have my first crafting project in the works!). So now it’s time to reveal the last two focuses for 2016. There are a ton of good words that start with C that would be great to focus on, and I struggled with which to make monthly focuses and which to make a year long goal/meditation, and in the end I decided on just one last year long word, knowing that many others will come up along the way.:

Aside from my focuses of baking, babies, badolatry, blogging, and brilliance, another theme of the year that seemed to sneak in became bravery. It is worth facing your fears. So in 2016 I am going to try and be a bit more intentional about that and make one of my words COURAGE. I love that courage is specifically tied to the idea that you are afraid or anxious or discouraged and you keep going anyway. You can’t be courageous without something to fear. 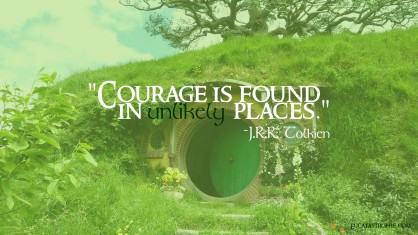 At the moment, my son is pretty fearless. He just goes for things and doesn’t even realize there is anything of which he should be afraid. I know that won’t last forever, and when the fears keep in, I want to teach him about courage in the face of anxiety and adversity. I’m not sure the best way to do that and if anyone has readings on courage they particularly like (preferably that aren’t tied to war because those are the only ones that come to mind for me…) I’d love to look into them.

Don’t worry, I have plenty more words I’m planning to address in 2016. But I’m going to wait and see how the year unfolds to let you know month to month what some of those might be!

Do any of you wonderful readers have goals or focuses for 2016?! I’d love to hear about them!