I have two delicious meatless recipes for you today. The first is a full meal and the second is great for a snack. A few weeks ago a fellow mom friend of mine mentioned this recipe and that it was one of her favorites and I have been looking forward to making it ever since. It’s quick, easy, delicious, and will be a great thing to bring to rehearsals with me since it isn’t a hot meal!

I love chickpeas. I love crunching them up in the oven to make them like corn nuts (though it’s hard to get them crunchy but not burned sometimes!), I love them in warm dishes, I love making homemade hummus, and so I couldn’t wait to try what a fellow 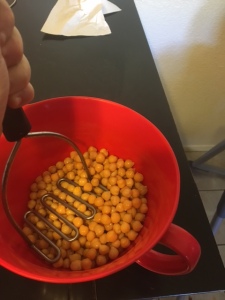 mama described as a chickpea variation on egg salad (especially since I don’t actually like egg salad but it always looks so good at picnics! I’ve found my solution!!)

Speaking of picnic, THIS RECIPE would probably be a good one for gatherings or if you are planning on leftovers as it makes quite a bit. You may want to cut it in half if you are flying solo or not a fan of leftovers. The hardest part of this recipe is mashing the chickpeas and if you don’t care about that, it would work just as well keeping them unmated. I started with a potato masher which rarely gets used here and found that the chickpeas were a perfect size to just stick in the middle of the masher. Since I had an impatient little boy waiting for lunch, I gave up on that idea and I busted out my mini prep processor and blended about half of the chickpeas and left the others. I left out the raisins because we didn’t have any and I figured less sugar wouldn’t be a bad thing. I was also lacking cilantro which I will buy and put on the leftovers but still turned out delicious! Definitely something I will make again and that our family will continue to enjoy. Also, the only way I’ve seen my son enjoy celery. I was just so happy to had an easy recipe since I spent the first half of the weekend knocked out with the worst migraine I’ve ever had so we didn’t get to do our usual recovery and prep for the week.

Want another meatless idea? Another friend of mine had us over for wine last month and had the most amazing homemade mini pickles! We found out it was just small very thin slices of cucumber marinated with very thin slices of onion and pickled in rice wine vinegar for several hours! I recreated this and let it sit overnight adding a splash of olive oil and some red pepper and oh my goodness it is one of my new favorite snacks. Have a breath mint handy though! 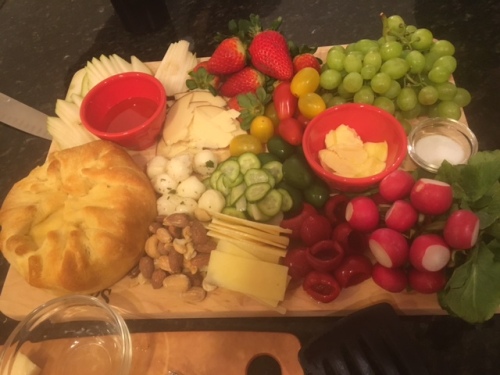 Mini homemade pickles featured in the center… mostly I just had to showcase this beautiful platter… sometimes staying in is SO MUCH BETER than going out!

So there are two meatless monday treats for you. (and both could even be vegan if you bought vegan mayo for the chickpea recipe!) I hope you week is off to a great start! I’m trying to make every moment count and maintain a consistent healthy routine before the chaos of March starts!

Oh, and BONUS: since the chickpea used celery, I cut the bottom of the stalk off and kept it for celery print valentines! You basically make a pretty stamp out of the natural pattern the celery makes. Perfect if you need an idea for a last minute valentine!!