We’re interested in focusing on fresh food in our family whenever possible. That way when we’re eating ramen or boxed mac and cheese or even just string cheese and chips during tech week we feel like we’ve achieved some sort of a balance at least. Sometimes that means ordering from Bountiful Baskets, a CSA that we’ve tried a few times. This weekend, thanks to a fellow VBE, we found an even better deal on fresh produce

If you’ve never heard of Produce On Wheels you should check out their website (link on their name if you want to click. Not affiliated, just excited about what they are doing and the great deals.) Warning: the lines are LONG and when they are out of something, they are out. But thanks to some strategic toddler wearing, we made it through the almost hour long wait  (which was actually kind of nice given the perfect weather and the fact that my husband and I won’t get a lot of time together to talk soon so we soaked up the time together!) and emerged with glorious produce in HUGE amounts. Most abundant were tomatoes this week and right away I knew I wanted to make homemade tomato sauce. The rest of our Saturday was already PACKED so we knew it would have to wait until Sunday and thanks to my Sunday schedule of work the majority of this project actually fell to my wonderful husband. So he is featured in all the pictures since I wanted to give him all the credit! (but i’m still counting it as a project. We spent a long time on this!)

That’s his “do you really have to take a picture right now? the water is boiling” face.

Braising the tomatoes was the most time consuming and exhausting part. This is basically where you put them in boiling water and then dunk them in an ice bath right after so you can peel the skins off. Then you need to de-seed which we did by crushing them. After this incredibly time consuming process, you get to the easy and exciting part of throwing them in the crock pot as well as any spices you may want (for us that meant a LOT of garlic) we stole ideas from several recipes but mostly seasoned with garlic, basil, and salt and pepper. If you want to go really crazy you can add some cream to the sauce during the last hour of slow cooking, but we were having a rich enough meal as it was so we skipped that this time. You can also run the tomatoes through a food processor or use a hand held stick food processor to make the sauce smoother, but we kept ours fairly chunky because fresh sauce is the only time I don’t mind chunky tomato sauce.

So while this delicious sauce cooked, I went to work tutoring and then to run some errands and to yoga and I came home to the most delicious smelling house and some fresh tomato sauce to pour over spaghetti squash. And since we still had large tomatoes left, my husband made me this incredible Caprese salad as a starter. It was an Italian feast and I’m so excited to gobble up the leftovers today. I would love to make homemade sauce a regular thing… maybe after Macbeth closes I’ll even bust out some homemade pasta or ravioli to go with it! (it’s good to have some lofty goals, right?) In the meantime, I am now craving all sorts of other Italian treats… but I’ll stave them off with another shot of espresso… 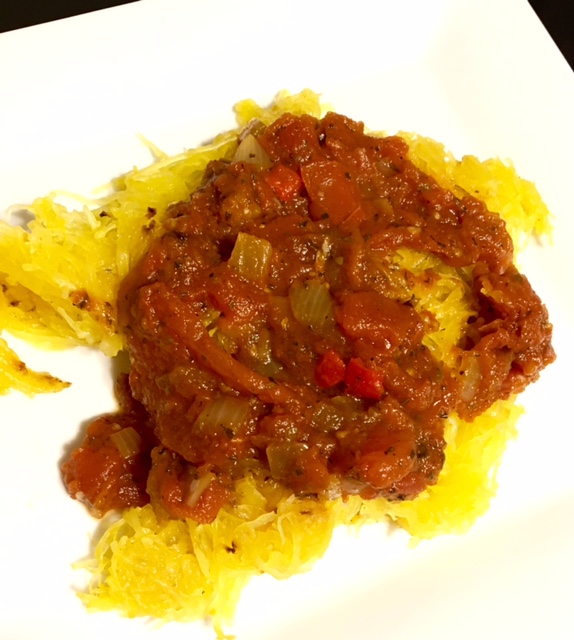 All the tomato sauce goodness, none of the pasta carbs… aka more room for cheese!!