So… I am a little obsessed with avocado. It is a major component in some of my favorite things: sushi rolls, guacamole, fancy salads… I will even go for straight up avocado on its own or even stuffed avocado which is FABULOUS and something I may have to post about in the future.

My husband is a little obsessed with humus. Even when I’ve tried a few recipes I thought were just OK, he was a pretty big fan. I can eat humus as an appetizer, he can eat it as a meal. So when I found a recipe for Avocado Humus I thought THIS IS PERFECT! the best of both worlds and we can chow down on veggies and pita and this dip together.

As a bonus, the recipe was super simple. It was basically take an avocado plus a can of chickpeas, add generous amounts of lime juice and olive oil plus some salt, pepper, and cumin and a clove of garlic and food process to your desired consistency. Well, the food processing was the best part. Little guy was dancing to the pulsing processor with his fists in the air and that was a ton of fun. But the end product ended up being a bit disappointing. 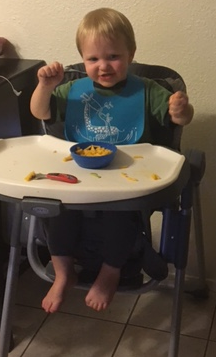 That excitement made the project worth it…

It’s not that it was bad. It’s just that… instead of combining the best of both worlds we kind of lost the best of both worlds. We even toped it with some fresh cilantro, which usually makes us much more excited about a dish, but in the end, Hubby wished he was eating a humus with a stronger flavor and I was wishing we’d just made guacamole. One thing in its favor is that it did not go brown as fast as guacamole would, but we also didn’t devour it as fast as we would a big bowl of fresh guac. So we won’t be repeating this one. Oh well, on to the next!