Those of you that read my last cooking post about making homemade tomato sauce know that we recently got an astounding amount of food from Produce on Wheels and have been learning lots of new, fun things to use that food (as well as revisiting some old favorites) Well, included in our produce haul was over 20 green chill peppers…

We have several recipes involving green chili that we are hoping to try but don’t have time to try them all at the moment, so the first cooking adventure we had was roasting and freezing the majority of the peppers. I have roasted plenty of veggies in the past, but never chili peppers or anything I intended to peel after… I had also never used the broiler setting on my stove before (I know I know… have I mentioned my husband does most of the cooking? You just don’t use the broiler setting when baking!)

To be honest, I don’t think I left them in to broil quite long enough or else I didn’t give my stove enough time to preheat, because even after pulling them out and giving them twenty minutes to steam in a ziploc bag while I took my squirmy toddler for a walk, it was REaLLY hard to peel them! I kept either still having large pieces that wouldn’t come off, or the ones at the bottom of the bag seemed to have steamed too much and the “meat” of the pepper was coming off with the peel/disintegrating! (Also, you can note how I was not using the recommended gloves… I washed my hands about four times before taking my contacts out after!) 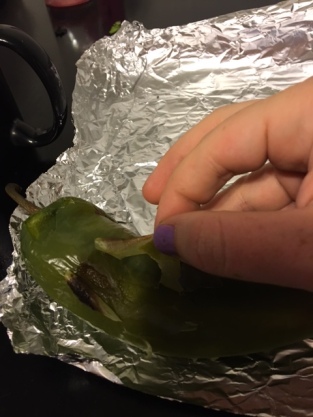 Still, even with the non perfect roasting job we managed to get quite a bit of green pepper which I apportioned into half cups and froze. Now we can use them whenever we have down time to try green chili sauce or green chili mac and cheese, etc. etc.

We kept some peppers fresh and let them ripen a little longer for the other big cooking project- chili relleno. This was a much more involved process than we originally thought. We still roasted the peppers for this recipe, but instead of using the broiler we let our gas stove work its magic and roasted them right on the stove top fire.

We actually bought a few poblanos to go with the chills we already had because we wanted to try out the difference. This was obviously not one of our healthiest cooking 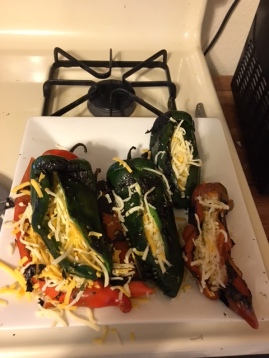 attempts because we used ALL THE CHEESE and you want a nice crispy coating around the chili too… the chills didn’t end up tasting much different aside from slightly more kick from the poblanos and slightly more sweetness from our green chills that were starting to turn red from ripening. The contrast was really good but definitely less noticeable with all that cheese!

I recommend serving this recipe with fresh salsa! It will make all the difference. This project was messy, and gooey, and delicious but one of those things that I don’t think we will repeat and stick to ordering at restaurants instead so they can clean up the mess instead of us! I’m excited to use the frozen chili soon! We have been adding some to regular recipes and enjoying the extra kick.

YUM!!!! We used a more traditional flour and egg wash and could probably have aded even more crispy covering but just wanted a hint of crunch.. we put all our calories towards the CHEESE.