It is finally cooling off again! One of the most exciting things about that for me is that I can return to trail running- something I still consider myself to be a bit of a beginner at, but that I have done for about a year now. SO I thought I’d share a bit about how I started trail running and what I would say to someone who might be interested in doing the same!

When I started running I’m not sure what would have been more surprising to hear someone tell me about my future- the idea that I would eventually do a half marathon or the idea that I would eventually want to run on a mountain… but one led to the other. During my training with Team World Vision, one of my teammates mentioned that he would rather run twice as far on the trail than on the road. That sounded totally unreal to me, but he explained that the views were so beautiful it distracted him more and that the uneven, softer terrain (compared to concrete especially) was better on his joints. It took me several months to even consider trying this for myself and then I got pregnant with my third and running on a trail was the last thing on my mind as I was constantly nauseated and exhausted. This past year though, as I started hiking more, I decided I’d combine two of my favorite ways to work out and start my journey of trail running. 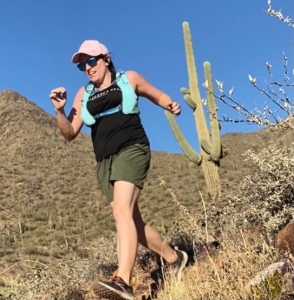 There have been bumps and bruises along the way, but more about that later and let’s get into some basics of what steps you may want to take if trail running sounds at all interesting to you:

As I mentioned above, I started with a good road running base and I didn’t jump back in immediately post partum until I had re-established that running base. I definitely recommend this so you aren’t injuring yourself and you have a good cardio foundation. I also suggest having a hiking base and starting on a trail you know pretty well. There were some hikes I would go on and make specific notes of if they might be a good match for a beginning trail run or if that was something I’d stick to only hiking. Knowing the trail ahead of time meant I could spend less time looking at my All Trails app trying to be sure I was staying on the right path and more time focusing on my form and on not tripping over rocks!

That brings me to my next point- trail running is definitely different than road running not only because of possibly including more altitude changes, (maybe you run on hills a lot when you road run, but I had always trained on pretty flat routes) but also because your form has to change to navigate the terrain. You have to lift your feet a bit higher than you would when road running so 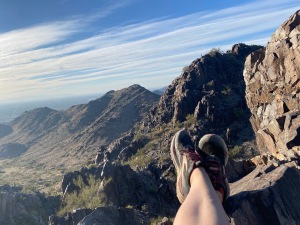 you trip less. You have to be prepared to hydrate even more than you normally would (thank goodness for a good hydration pack so I could hydrate while keeping my hands free! But the most important thing is just to make sure you have more water than you think you’ll need each time and there is no shame in turning early if you find your water is running low!) I will also say that I definitely upped my game when I invested in trail running shoes that had a better grip on the bottom than my standard running shoes or my beat up shoes I’d use for day to day hikes.

Even with great shoes and hydration, there are a few things I suggest you make peace with ahead of time if you want to try trail running. If you make this a regular part of your exercise routine, you will fall at some point. Prepare accordingly- run with a bandaid or two, shake it off, and don’t feel embarrassed if fellow people on the trail saw it happen- I guarantee they are more interested in helping that judging. Also, prepare for wildlife encounters. In other parts of the country y’all have different animals that scare me (I’ve heard stories of bears, moose, more bears…), but here in Phoenix we have scorpions and snakes. During rattler season I don’t trail run with my headphones in because I want to be more aware of any snake sounds before I see them. I also pull way back on less trafficked trails because I definitely prefer just avoiding these slithering desert dwellers and they USUALLY don’t prefer to hang out where there are a ton of people passing by. Researching some of these things ahead of time helped me not totally melt down when I had my first snake encounter… but I would LOVE for those encounters to stay as rare as humanly possible and it still made my heart pump way faster than even the hardest elevation climb…

My last few tips are these: If something about trail running intrigues you or is niggling at the back of your mind, JUST DO IT! One foot in front of the other. Leave ego at the the door when it comes to pacing- I think I trail run slower than I walk most times and yet I am putting in WAY more effort and I’m still really proud of myself for doing it. Plus, I always say the slower pace is worth it because I never forget to stop and enjoy the views! If you do start trail running regularly, be sure you are cross training to avoid injury and give your body time to recover. I highly recommend cross training that can also help your balance such as yoga or isometric strength work-this is good for all types of running, but I’ve found this has especially helped me on the trails.

Have you ever tried trail running? Any tips you’d add? Any questions I totally forgot to answer? Let me know.