When I first started running I was convinced that a runner’s high was a cruel, inhumane lie that runners told other people to trick them into joining in on the misery. So I thought I’d write a post about how I started my running journey and while I will be focusing on running, I think some of the lessons from it apply to starting anything new and difficult. I also have been just really missing running because it is INSANELY hot here in Phoenix already, but I know that summer is prime running time for my readers in other parts of the country so it seemed like as good a time as any to share this! And even if you are not a runner and never become a runner, I believe there are some parallels that will apply to you anyway… 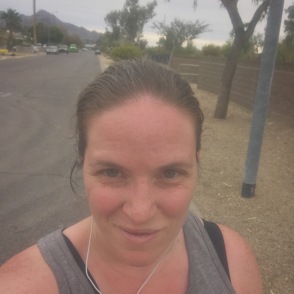 If you ignore the several, VERY limited attempts I had previously made to   start running that didn’t even last a week, I started running with the Couch to 5k App back in early 2018. The program is great at helping prevent injury because it has you alternate walking with running and build up endurance slowly.

My runner’s high doesn’t hit until around 1.5 to 2 miles. Those starting steps are always so hard. STILL. on 90% of my runs! It also is truly hard to describe because the running isn’t EASY at that point, but it certainly, to me, feels easIER than the start did. And this is when my brain quiets down and I can just pay attention to the cadence of my feet or the music or

If you decide to run, maybe your runners high will hit earlier! Some of my fellow runners have mentioned feeling good from half a mile in or so, others (with much faster paces than me!) tell me it isn’t about the mileage so much as the time logged- I heard times referenced from 30-50 minutes for that wave of good feelings to hit.

My first 5K was a race I trained for 2 months. Now, it is a distance I run regularly- whether that be at a comfortable pace or pushing myself to test some speed, or sometimes even as a “warm up” before a strength class- all because it is a distance short enough to not feel daunting or difficult to schedule, but long enough that I am guaranteed at least a bit of that infamous runner’s high. I say this because I was an insanely unlikely runner. I needed help with how to run without hurting myself (I have a history of TERRIBLE shin splints) and I needed time to build up from square one. NONE of those first weeks felt good aside. I was on the verge of convincing myself I just was not made for running, not even short distances at a turtle pace. But I’m so glad I pushed through because becoming a distance runner has changed my life and helped me change the lives of others. 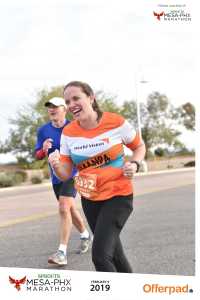 Sometimes I still only get to go on runs that last a mile, just due to time constraints or temperature constraints but still wanting my body to remember the training of running. And sometimes I stop at a mile or desperately want to because I still often feel really discouraged and exhausted that first mile, but now I know how much better it gets once I push through and get to that runner’s high. It’s the discipline to get there. And that has translated to many other things in life- the agony as an actor of pushing through auditions for the joyful chance to get to do a show, the moments of pulling it back together as a stay at home mom instead of giving up and heading back to bed to cry because I know when we get past this meltdown it gets so much better again, etc. But the better part doesn’t just happen, you earn it through pushing through the first part (or learning when a DNF is in order and figuring out your next step to get back at it!)

Have you experienced runners high? Do you have your own unique runners high in an activity you like to do? Something you have to push through and earn but that totally pays off if you keep going? I’d love to hear about it.

2 thoughts on “Runners High: OR, How Starting is the Hardest Part”